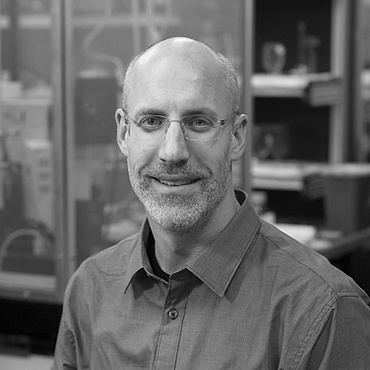 We are interested in understanding the mechanisms by which neurons and glial cells interact to support normal communication in the nervous system. Neurons transmit information at specialized synaptic junctions, points of contact where action potentials elicit the release of a chemical neurotransmitter. Neurotransmission at excitatory synapses involves the vesicular release of glutamate, diffusion and binding of glutamate to various receptors, and uptake of glutamate by transporters. Transporters are critical for ensuring that receptors are available to bind glutamate during subsequent release events, as well as for limiting receptor activation so that excitotoxic damage does not occur. Transporters may also shape the activation of receptors on a more rapid time scale during synaptic transmission. Glutamate transporters belong to a multigene family consisting of five members, EAAT1-5 (EAAT for Excitatory Amino Acid Transporter). EAAT1 and EAAT2 are expressed in glial cells, primarily astrocytes and Bergmann glia. The critical role of these glial transporters has been shown by the abnormal neuronal signaling and profound behavioral consequences observed when their activity is reduced. We study the properties of these glutamate transporters in expression systems as well as in acute tissue such as the hippocampus and cerebellum. Glutamate transporters harness the energy stored in the electrochemical gradients for Na+, H+, and K+ to force glutamate into cells against its concentration gradient. Because transport is electrogenic we can monitor their activity using electrophysiological (patch-clamp) techniques. To provide insight into the intrinsic properties of these transporters, we apply glutamate with sub-millisecond resolution to outside-out patches using a piezoelectric bimorph. These studies are combined with whole-cell recordings from visually-identified astrocytes and neurons in acute brain slices to monitor the activity of transporters during synaptic transmission. Through these studies we hope to determine the fate of glutamate after it is released- how far it diffuses, the types and locations of the receptors it activates, and the role of transporters in shaping its spatial and temporal profile in the extracellular space. Because transporters play a critical role in glutamate homeostasis, understanding their function has relevance for numerous afflictions, such as stroke, epilepsies, and neurodegenerative diseases such as amyotrophic lateral sclerosis (ALS). Glial cells perform critical functions in the nervous system. They provide the energy necessary to sustain neural activity, they sequester the ions and neurotransmitters released during synaptic transmission, and they form myelin sheets around axons allowing the rapid transmission of action potentials over long distances. Despite the interdependence of neurons and glia, little is known about the pathways used for communication between these two cell types. A related area of research in our lab involves the study of these pathways and their roles in development and synaptic physiology. The recent discovery of glutamatergic synapses between pyramidal neurons and oligodendrocyte precursor cells (OPCs) in the hippocampus has raised many questions about the involvement of these neuro-glial junctions in regulating OPC differentiation, as well as the role of these "progenitor cells" in hippocampal physiology. We are currently studying these neuro-glial synapses though whole-cell recordings from identified OPCs, and dual pyramidal neuron-OPC recordings in hippocampal slices. As glutamate receptor signaling may regulate oligodendrocyte development and thus myelination, these studies may lead to new approaches for stimulating re-myelination after injury or disease.