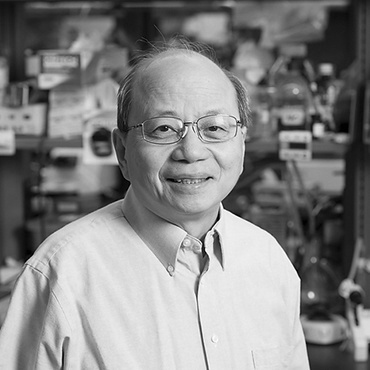 Our laboratory is interested in the area of sensory transduction: specifically visual and olfactory transductions, which are the processes by which the senses of vision and olfaction are initiated. These two processes have interesting similarities and differences. Vision can in turn be distinguished into image vision and non-image vision. Image vision is the conventional vision by which we view objects and track their motions. Non-image vision is the subconscious vision for detecting the general luminance in the ambience.

Rods and cones are the retinal photoreceptors that absorb light for initiating image vision. We are studying the cellular and molecular details underlying rod and cone phototransduction. Rod transduction is now well understood, involving a cGMP signaling pathway. In darkness, the cyclic nucelotide, guanosine 3’:5’-cyclic monophosphate (cGMP), directly activates a cyclic-nucleotide-gated (CNG) cation channel on the photoreceptor plasma membrane and maintains a steady inward electrical current across the membrane, depolariziang the cell and maintaining a steady release of the neurotransmitter glutamate from the cell’s synaptic terminal. Light absorption by the rod visual pigment, rhodopsin, leads to a G-protein-coupled pathway that activates a phosphodiesterase to hydrolyze cGMP. As a result, the CNG channel closes, stopping the dark current and producing a membrane hyperpolarization as the electrical response to light, which reduces the synaptic-transmitter release in darkness. Calcium ions also have an important role in phototransduction by mediating negative-feedback control on the phototransduction signaling cascade. These feedbacks bring about light adaptation, a crucial property of the visual system for adjusting its sensitivity to light. Currently, we are focusing on cones, which have a similar phototransduction mechanism but differ in quantitative details. Cones are particularly important for human vision, without which we are legally blind.

Rods and cones also contribute to non-image vision, which include functions such as circadian photoentrainment, pupillary light reflex, etc. The rod and cone non-image-visual signals are sent to specific brain centers via primarily the axons of a subset of retinal ganglion cells. A recent surprising discovery is that these ganglion cells are themselves intrinsically photosensitive by expressing a visual pigment, melanopsin. Thus these unusual retinal ganglion cells serve dual functions: they convey rod and cone signals and they also initiate light signals themselves. We have been studying the connectivity and the physiology of these cells in several mammalian species, including mouse and primates. Although these cells, similar to rods, have high signaling efficiency by being capable of signaling single-photon absorption to the brain, they have an extremely low pigment density (compared to rods and cones), presumably not to interfere with the passage of light to the rods and cones situated underneath them for the all-important image vision. We are studying the phototransduction mechanism in these fascinating, newly-discovered photoreceptors. This process does not appear to involve cGMP as in rods and cones.