Professor of Psychiatry, Neurology and Neuroscience, Director, Division of Neurobiology 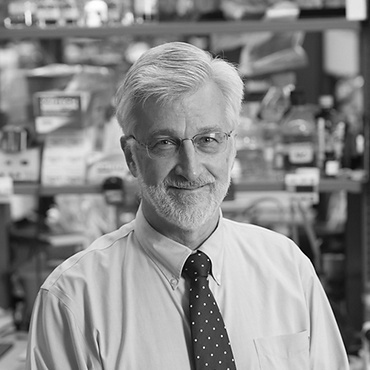 HD is an autosomal dominant, progressive, fatal neurodegenerative disorder causing abnormality of movements, thoughts and emotions, with degeneration in the striatum of the basal ganglia.  An expanding CAG repeat coding for polyglutamine in the huntingtin protein causes altered conformation of the protein, aggregation and the formation of intranuclear neuronal inclusions.  We have suggested that the major source of cell toxicity may be an oligomeric soluble aggregate with a compact beta sheet conformation.  Proteolytic processing of huntingtin and nuclear translocation of an N-terminal fragment leading to alterations of gene transcription appear to be key pathogenic events.  We use biophysical and biochemical techniques, cell models, and mouse models in order to better understand these processes, and provide targets for development of rational therapeutics.

More recently we have focused on molecular pathogenesis of Parkinson’s disease.  We have studied alpha-synuclein, the first identified cause of genetic PD, and more recently Leucine Repeat rich Kinase 2 (LRRK2), another autosomal dominant form.  We find that both alpha-synuclein and LRRK2 interact with Parkin, one of the recessive PD genes, suggesting the potential emergence of a pathogenic pathway.  We have developed a very effective model for cell toxicity caused by mutant LRRK2, and have shown that kinase activity is necessary for LRRK2 cellular toxicity.  This raises the hope that LRRK2 could be an excellent target for therapeutics development, analogously to the way kinases are therapeutic targets in the cancer field.  We are currently studying protein interaction partners and attempting to develop transgenic mouse models.

Schizophrenia has long been believed to be a subtle disorder of neuronal development.  Disrupted in Schizophrenia 1 (DISC1) was previously identified as being interrupted by a chromosomal dislocation, which strikingly segregates with schizophrenia and other major mental illness in a large pedigree in Scotland.  The predicted protein product of the DISC1 translocation appears to act as a dominant negative, causing neurite outgrowth abnormalities in neurons in culture and cortical migration defects in vivo.  We have preliminary data indicating that transgenic mouse models over-expressing the predicted mutant DISC1 protein product have subtle abnormalities of neurite outgrowth and behavior.  Thus, the hope is that by using similar cellular and molecular techniques which have been successful in the neurodegenerative diseases, we can better understand psychiatric disorders such as schizophrenia.  Ultimately, neurobiologic study of schizophrenia may help illuminate normal thought perception and emotion--and help us understand the biology of human nature itself.