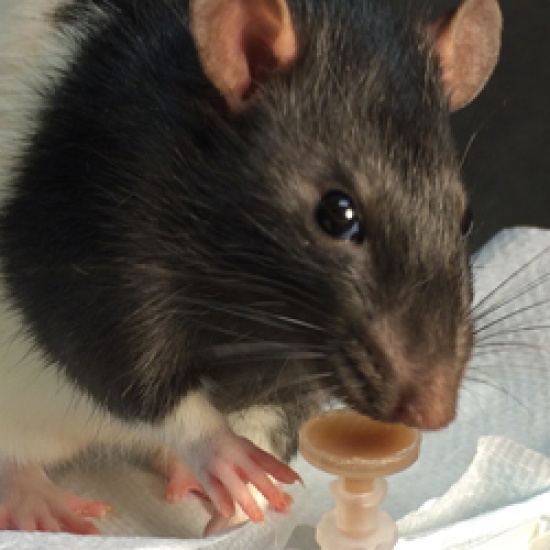 Article highlighted on The Hub

You’re shipwrecked on a desert island. You wander from your base camp in desperation, searching for water. Suddenly, a stream appears! The water is fresh and clear, the best you’ve ever tasted. There’s just one problem: There’s no trace of how you got there, and you’re not sure you can find it again next time.

Now Johns Hopkins neuroscientists believe they have figured out how some mammals’ brains — in this case, rats — solve such navigational problems. If there’s a “reward” at the end of the trip, like the chocolatey drink used in their study, specialized neurons in the hippocampus of the brain “replay” the route taken to get it, but backward. And the greater the reward, the more often the rats’ brains replay it.

According to the researchers, the finding suggests that both the presence and magnitude of rewards influence how and how well the hippocampus forms memories. The hippocampus is a vertebrate brain structure long known to be vital for making and storing memories, and in so-called spatial relations.

A summary of the work will appear online Aug. 25 in the journal Neuron.

“We’ve long known that the brains of awake animals have these replay events when they pause in their travels. Now we know that the information in those replays is influenced by reward, probably to help solidify those memories,” says David Foster, Ph.D., associate professor of neuroscience at the Johns Hopkins University School of Medicine.

As animals — including humans — scurry about or otherwise travel through an environment, their brain waves oscillate up and down, Foster notes. When they pause, and when they are in slow-wave sleep, their brain waves calm down, oscillating more gently, except for one or two “sharp wave ripples” per second. The sharp wave ripple pattern — a deep dive from baseline, followed by several small ripples and a return to baseline — takes just one-tenth of a second, but it is then that those “replays” occur in hippocampal neurons called place cells, he explains.

Each place cell in a rat’s brain has a favorite spot: a specific location in a specific environment where it likes to fire. Previous research in Foster’s laboratory revealed that, before going anywhere, rats actually “envision” their routes through the sequential firing of place cells. The researchers also knew that sometimes, during pauses, rats replay sequences in reverse, but no one knew why.

In the new study, the rats had a very simple task: Run back and forth along a linear track between points we’ll call A and F. On each trial run, the rats were sometimes provided with a chocolatey liquid reward at point A or F, but they were just as content to run the track without a reward.

While the rats were running, the scientists monitored the activity of more than 100 place cells at a time — a feat made possible by weeks of patiently placing 40 miniature wires, thinner than a human hair, into the hippocampus of each rat to monitor the electrical activity of about five to 10 nearby place cells. Each place cell would fire when the rat was in a specific part of the track: point B, for example, or region C through E.

On an ordinary run, a rat enjoying its reward at F would experience an equal number of forward and backward replays: Its place cells would sometimes represent a sequence of A, B, C, D, E, F and sometimes F, E, D, C, B, A. But that was not the case when the amount of reward was altered at point F. The number of forward replays remained the same, but the number of reverse replays increased or decreased in unison with the change in the reward.

“The two types of replay are very similar,” says Foster. “There’s no obvious reason for one to be more prevalent than the other, so we think this is the brain’s way of linking a reward with the path taken to reach that reward.” Back on the desert island, if the same mechanism occurs in humans, Foster says, the process could help a person recall how to get back to the stream by making important what were previously unimportant details about one’s surroundings.

Foster says a lot more research needs to be done to learn details about the result of these reverse replays, and if their findings do indeed apply to humans. But he thinks this research already suggests the importance of giving the brain frequent “pauses” or breaks from the “rat race” of life, since these replay events only occur when the rats pause long enough to enjoy a sip of chocolate.

Other authors of the report include R. Ellen Ambrose and Brad Pfeiffer of the Johns Hopkins University School of Medicine.

This work was supported by grants from the McKnight Endowment Fund for Neuroscience and the National Institute of Mental Health (R01 MH085823, R01 MH 103325).