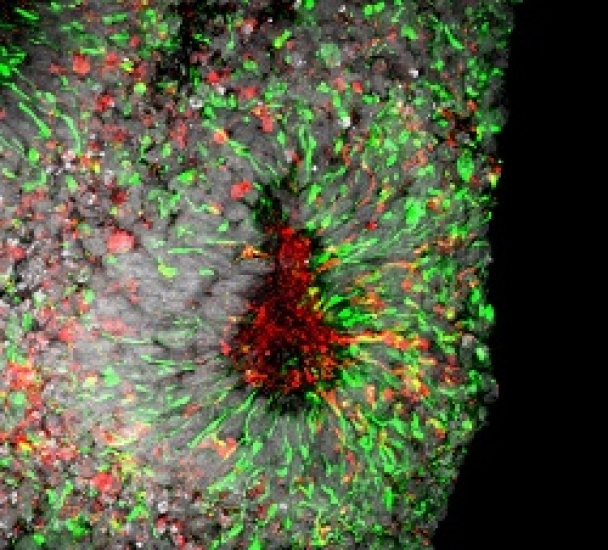 Drs. Guo-li Ming and Hongjun Song, Professors of Neurology and Neuroscience, in collaboration with the Natiional Center for Advancing Translational Sciences (NIH), have identified small-molecule drugs that may prove effective in stopping the Zika Virus.  Their work was recently published in Nature Medicine.

In a summary of their work, published in Nature Medicine on Aug. 29, the investigators say they screened 6,000 existing compounds currently in late-stage clinical trials or already approved for human use for other conditions, and identified several compounds that showed the ability to hinder or halt the progress of the Zika virus in lab-grown human neural cells.

The research collaboration includes teams from the Johns Hopkins University School of Medicine, the National Institutes of Health and Florida State University.

“It takes years if not decades to develop a new drug,” says Hongjun Song, Ph.D., director of the Stem Cell Program in the Institute of Cell Engineering at Johns Hopkins. “In this sort of global health emergency, we don’t have that kind of time.”

“So instead of using new drugs, we chose to screen existing drugs,” adds Guo-li Ming, M.D., Ph.D., professor of neurology at the Johns Hopkins University School of Medicine. “In this way, we hope to create a therapy much more quickly.”

The new findings are an extension of previous work by the research team, which found that Zika mainly targets specialized stem cells that give rise to neurons in the brain’s outer layer, the cortex. The researchers observed Zika’s effects in two- and three-dimensional cell cultures called “mini-brains,” which share structures with the human brain and allow researchers to study the effects of Zika in a more accurate model for human infection.

In the current study, the research team exposed similar cell cultures to the Zika virus and the drugs one at a time, measuring for indicators of cell death, including caspase-3 activity, a chemical marker of cell death, and ATP, a molecule whose presence is indicative of cell vitality.

Typically, after Zika infection, the damage done to neural cells is “dramatic and irreversible,” says Hengli Tang, Ph.D., professor of biological sciences at Florida State University. However, some of the compounds tested allowed the cells to survive longer and, in some cases, fully recover from infections.

Further analysis of the surviving cells, says Ming, showed that the promising drugs could be divided into two classes: neuroprotective drugs, which prevent the activation of mechanisms that cause cell death, and antiviral drugs, which slow or stop viral infection or replication. Overall, Song says, three drugs showed robust enough results to warrant further study: PHA-690509, an investigational compound with antiviral properties; emricasan, now in clinical trials to reduce liver damage from hepatitis C virus and shown to have neuroprotective effects; and niclosamide, a drug already used in humans and livestock to combat parasitic infections, which worked as an antiviral agent in these experiments.

Song cautioned that the three drugs “are very effective against Zika in the dish, but we don’t know if they can work in humans in the same way.” For example, he says, although niclosamide can safely treat parasites in the human gastrointestinal tract, scientists have not yet determined if the drug can even penetrate the central nervous system of adults or a fetus inside a carrier’s womb to treat the brain cells targeted by Zika.

Nor, he says, do they know if the drugs would address the wide range of effects of Zika infection, which include microcephaly in fetuses and temporary paralysis from Guillain-Barre syndrome in adults.

“To address these questions, additional studies need to be done in animal models as well as humans to demonstrate their ability to treat Zika infection,” says Ming. “So we could still be years away from finding a treatment that works.”

The researchers say their next steps include testing the efficacy of these drugs in animal models to see if they have the ability to combat Zika in vivo.

Zika was first identified in 1947 and garnered little scientific interest until an outbreak began in South America in mid-2015. This outbreak is now known to be responsible for an increase in cases of microcephaly — a severe birth defect in which afflicted infants are born with underdeveloped brains. In the continental United States, there have been a total of 2,260 reported cases of Zika. Though most cases are associated with travel, 43 cases of local transmission have been reported in Florida, in the Miami area. In addition, Puerto Rico has reported 7,855 locally transmitted cases, spurring the Obama administration to declare a public health emergency in the territory on Aug. 12. From these reports, the Centers for Disease Control and Prevention (CDC) estimates that up to 270 babies may be born with microcephaly by 2017. The CDC is advising preventive measures for people in these areas, including eliminating standing water where mosquitos breed and creating a barrier from bites with clothing and wearing insect repellents. The Florida Department of Health has a robust mosquito-borne illness surveillance system. It has partnered with local groups and the CDC to fight Zika infections, and is providing free Zika testing to all pregnant women. The Puerto Rico Department of Health has put an active Zika surveillance system in place to coordinate reporting from health care providers and weekly mosquito spraying in many areas.

The Zika virus is commonly transmitted from mosquito bites or from an infected person to an uninfected person through sexual contact. Despite the potential effects of infection, only one in four infected people will present symptoms if Zika infection, allowing the virus to spread rapidly in areas with local transmission. Because of this, the CDC recommends all pregnant women with ongoing risk of Zika infection, including residence or frequent travel to areas with active Zika virus transmission, receive screening throughout their pregnancy.

Many research groups are fast tracking the development of vaccines, treatments and mosquito control measures to combat further spread of the virus.

This work was supported by the Intramural Research Program of the National Center for Advancing Translational Sciences, ZIKV seed funding from Florida State University, Startup fund from Emory University, the Brain and Behavior Research Foundation, the New York Stem Cell Foundation, and the Maryland Stem Cell Research Fund, the National Institutes of Neurological Disorders and Stroke (NS048271, NS095348, NS047344, NS097206) and the National Institute of Allergy and Infectious Diseases (AI119530).