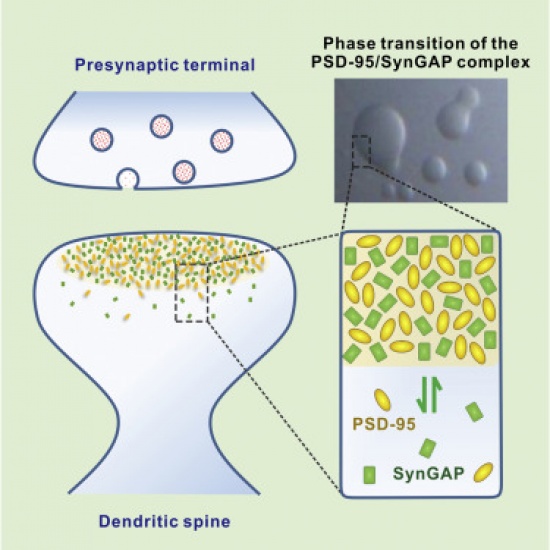 Research reveals how PSD forms and why defects can cause autism

A collaboration between Dr. Richard Huganir, Professor and Chair of the Department of Neuroscience, and Dr. Mingjie Zhang, Professor at Hong Kong University of Science and Technology, has yielded new insights into the regulation of postsynaptic densities (PSDs).  In their recent study, the scientists discovered that SynGAP and PSD-95, two abundance proteins in PSD that are known to cause autisms when mutated, can form an autonomously assembled network structure both in test-tube and in living cells.

All neurons in our brain are wired via a micron-sized connection unit called synapse, and each synapse contains a layer of densely-packed, protein rich compartment called postsynaptic density (PSD), which is responsible for brain signal processing and transmission. Mutations of genes encoding PSD proteins are major causes of psychiatric disorders including autisms, schizophrenia, and intellectual disabilities (ID). While the existence of PSDs has been known to scientists for 60 years, how PSDs form and change in response to brain activities are poorly understood.

In a recent study, scientists from The Hong Kong University of Science and Technology (HKUST) discover that SynGAP and PSD-95, two abundance proteins in PSD that are known to cause autisms when mutated, can form an autonomously assembled network structure both in test-tube and in living cells. Most surprisingly, the SynGAP/PSD-95 assembly can form stable "oil-like" droplets in the midst of aqueous cytoplasm of living cells via a phenomena called phase-transition. This finding provides a possible answer for the long-lasting question of PSD formation in the field of brain science. Importantly, the HKUST team also found that defects of SynGAP or PSD-95 identified in autism patients alter the "oil-like" droplets formation of the complex and change the synaptic signaling activity of neurons.

"SynGAP and PSD-95 are famous for their roles in learning and memory as well as their involvements in diseases like autisms and epilepsy when mutated, but exactly how these two proteins carry out their functions are not very clear" said Professor Mingjie Zhang, leader of the research group. "Our studies of the SynGAP/PSD-95 complex, via a multifaceted approach, led to an unexpected finding that living neurons can "borrow" a very fundamental phenomena called phase-transition to place different functional units at specific cellular locations". Prof. Zhang added, "everyone has seen phase transition in our daily life. Liquid water turning into ice is a form of phase transition. Living cells can selectively "pick" certain proteins or nucleic acids to undergo phase transition forming a non-membrane-enclosed cellular compartments, so their physiological functions can be regulated."

"Our work also provides mechanistic insights into why mutations altering the SynGAP/PSD-95 interaction can contribute to various brain disorders including seizure, autism, and ID, a spectrum of central nervous system diseases that have no treatments. We believe that our discovery will also inspire new ways to develop therapeutic methods for these devastating diseases to human society", said. Menglong Zeng, the paper's first author and a Ph.D. student in Prof. Zhang's laboratory.

"This study is only the beginning of teasing out how other proteins collectively contribute to the formation and brain activity-dependent alterations of PSD." Prof. Zhang said. "We are also interested in trying to find out whether other synapses, the neuron/muscle connections for an example, also adopt the phase-transition strategy to build their PSDs".