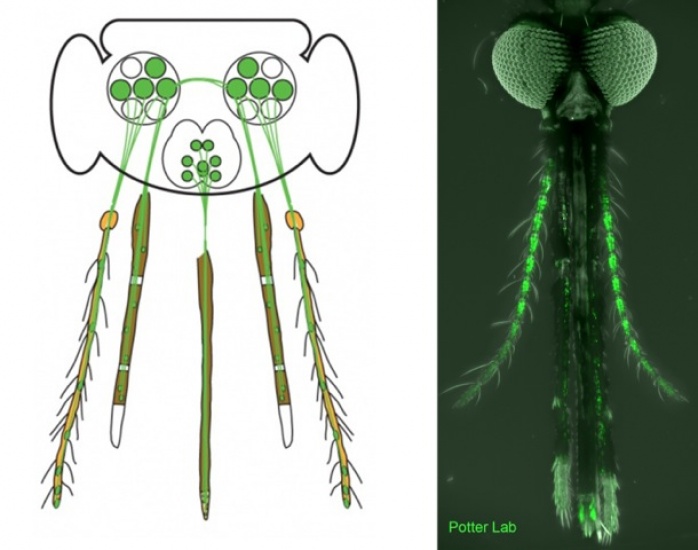 The Potter lab uses neurogenetic techniques to identify olfactory neurons in the Anopheles gambiae malaria mosquito. The group identifies that mosquitoes may have a brain region dedicated to the integration of smells and tastes given off by people.

Dr. Christopher Potter, Assistant Professor of Neuroscience, introduced powerful genetic tools into the mosquito system, allowing his group to identify, for the first time, which regions in the mosquito's brain are targeted by olfactory neurons originating from the mosquito's 'nose'.

Unlike humans, mosquitoes have three noses: the antenna, the maxillary palp, and the labella. The Potter lab, which studies insect olfaction, investigated where neurons in the 3 'noses' targeted the mosquito brain. The group discovered that one of the mosquito’s noses, the labella, has neurons that go to a region of the brain called the subesophageal zone. This is an insect brain region that has never before been implicated in the sense of smell. Previously, it had only been implicated with the sense of taste. The research suggests that there is a region of the mosquito brain that might be combining both smell and taste. In humans, this combination gives rise to the perception of flavor. This new study implicates that there maybe a region of the mosquito brain that acts as human flavor center. This perception may in turn regulate mosquito biting preferences.

A new study by Johns Hopkins researchers suggests that a specialized area of the mosquito brainmixes tastes with smells to create unique and preferred flavors. The findings advance the possibility, they say, of identifying a substance that makes “human flavor” repulsive to the malaria-bearing species of the mosquitoes, so instead of feasting on us, they keep the disease to themselves, potentially saving an estimated 450,000 lives a year worldwide.

A report on the research appeared online on Oct. 3 in the journal Nature Communications. Malaria is an infectious parasite disease of humans and animals transmitted by the bite of the female Anopheles gambiaemosquito. In 2015, experts estimate it affected 214 million people, mostly in Africa, despite decades of mosquito eradication and control efforts. There is no malaria vaccine, and although the disease is curable in early stages, treatment is costly and difficult to deliver in places where it is endemic.

“All mosquitoes, including the one that transmits malaria, use their sense of smell to find a host for a blood meal. Our goal is to let the mosquitoes tell us what smells they find repulsive and use those to keep them from biting us,” says Christopher Potter, Ph.D., assistant professor of neuroscience at the Johns Hopkins University School of Medicine.

Because smell is essential to mosquito survival, each mosquito has three pairs of “noses” for sensing odors: two antennae, two maxillary palps and two labella. The maxillary palps are thick, fuzzy appendages that protrude from the lower region of the mosquito’s head, more or less parallel to its proboscis, the long, flexible sheath that keeps its “feeding needle” under wraps until needed. At the very tip of the proboscis are the labella, two small regions that contain both “gustatory” neurons that pick up tastes and olfactory neurons for recognizing odorants.

To better understand how An. gambiae mosquitoes that cause malaria receive and process olfactory information from so many sensory regions, Potter’s team wanted to see where olfactory neurons from those regions go to in the brain.

They used a powerful genetic technique — never before accomplished in mosquitoes, according to Potter — to make certain neurons “glow” green. The green glowing label was designed to appear specifically in neurons that receive complex odors through proteins called odorant receptors (ORs), since OR neurons are known to help distinguish humans from other warm-blooded animals in Aedes aegypti mosquitoes, which carry the Zika virus.

“This is the first time researchers managed to specifically target sensory neurons in mosquitoes. Previously, we had to use flies as a proxy for all insects, but now we can directly study the sense of smell in the insects that spread malaria,” says Olena Riabinina, Ph.D., the lead author of the study and a postdoctoral fellow now at the Imperial College London. “We were pleasantly surprised by how well our genetic technique worked and how easy it is now to see the smell-detecting neurons. The ease of identification will definitely simplify our task of studying these neurons in the future.”

As expected, Potter says, the OR neurons from the antennae and maxillary palps went to symmetrical areas of the brain called antennal lobes, just as they do in flies. But Potter was quite surprised when he saw that the OR neurons from the labella went to the so-called subesophageal zone, which, he says, had never before been associated with the sense of smell in any fly or insect; it had only been associated with the sense of taste.

“That finding suggests that perhaps mosquitoes don’t just like our smell, but also our flavor,” says Potter. “It’s likely that the odorants coming off our skin are picked up by the labella and influence the preferred taste of our skin, especially when the mosquito is looking for a place to bite.”

Potter says the finding potentially offers researchers one more way to repel mosquitoes. The antennae and maxillary palps are more specialized for picking up long-range signals, while the labella come into direct contact with our skin. In fact, Potter says, before injecting their needlelike proboscis, mosquitoes use the labella to probe about on a victim’s skin. “We don’t really know why they do that, but we suspect that they’re looking for sensory cues that hint at easy access to a blood vessel,” he says. “This suggests that a combination of repellants could keep mosquitoes from biting us in two ways. One could target the antennal neurons and reduce the likelihood that they come too close, while another could target the labellar neurons and make the mosquitoes turn away in disgust — before sucking our blood — if they got close enough to land on us.”

The two-part genetic system Potter devised to generate the glowing neurons will make it much easier for his and other laboratories to mix and match genetically altered mosquitoes to generate new traits, he says. His group has already created a strain of An. gambiae mosquitoes whose OR neurons glow green upon activation. Scientists can thus see which neurons light up in response to a specific smell.

“Using this method, we hope to find an odorant that is safe and pleasant-smelling for us but strongly repellant to mosquitoes at very low concentrations,” says Potter.

His group was also able to compare the brains of male and female mosquitoes. Since only females use their sense of smell to find humans and males feed only on nectar, it was previously thought that males had just a rudimentary sense of smell. The Potter group found instead that males have the same level of complexity in their brains to detect odors as females but have fewer olfactory neurons. “It appears that males might just have a scaled-down version of a female’s sense of smell. So they can still smell everything a female smells, just not as well,” Potter says.

His group plans to study other types of neurons to better understand how signals from the mosquitoes’ three types of olfactory receptors interact to influence their behavior. For example, why is lactic acid not attractive on its own but highly attractive when mixed with carbon dioxide?

“We’d like to figure out what regions and neurons in the brain lead to this combined effect,” says Potter. “If we can identify them, perhaps we could also stop them from working.”

Other authors of the report include Darya Task, Elizabeth Marr and Chun-Chieh Lin of the Johns Hopkins University School of Medicine; and Robert Alford and David O’ Brochta of the University of Maryland, College Park.