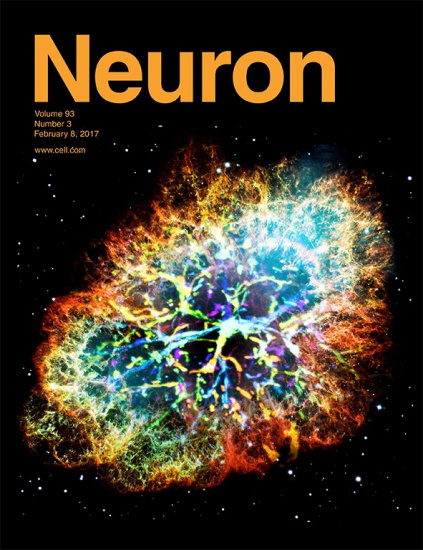 In a recent issue of Neuron, Agarwal et al. (2017) report that calcium efflux from mitochondria during brief openings of the mitochondrial permeability transition pore (mPTP) contribute to calcium microdomains.

Astrocytes are star shaped cells in the brain that provide crucial homeostatic support to the nervous system. They have a very elaborate shape, with highly branched processes that make contact with key structural elements including synapses, the points of communication between neurons, blood vessels to control the supply of energy to the brain, as well as nodes of Ranvier where action potentials are initiated along nerve axons. Although astrocytes are not electrically “excitable” like neurons, their processes are studded with receptors for a variety of neurotransmitters, many of which trigger intracellular calcium levels to rise. This form of signaling was discovered in cultured astrocytes more than thirty years ago, and in the last decade has been shown to occur in awake and behaving mice. These dynamic changes in calcium have been linked to changes in blood vessel diameter, increases in ATP production and the release of neuromodulatory substances, suggesting that they participate in key aspects of brain physiology. In addition to cell-wide changes in calcium, astrocytes also exhibit spontaneous increases in calcium in small, isolated regions along their branches, regions functionally defined as microdomains. Yet, little is known about this remarkable, highly localized form of signaling. Are astrocytes responding to activity in the neurons around them or are astrocytes initiating the activity themselves? And where does the calcium come from and what is the purpose of its increase?

To study microdomain activity in astrocytes, we developed several new technologies. To be able to see calcium changes in the thin branches of astrocytes, we genetically engineered mice so that their astrocytes would produce a calcium sensor — a protein attached to their membranes that would glow green when calcium was present. Microdomain activity in astrocytes of these mice exhibited a constellation of brief flashes all over the cell. To quantify this complex form of activity, we developed software based on machine learning to automatically detect and monitor key features of these events, such as their area, magnitude and frequency.

Then, through a bit of serendipity, we noticed that mitochondria, the organelles that produce ATP inside cells, were often in close proximity to the calcium sensors. Mitochondria have been shown to store and release calcium in various cell types, so we explored whether they were responsible for periodically releasing calcium in astrocytes. First we located mitochondria in astrocytes by genetically engineering a second set of mice in which only astrocyte mitochondria were labeled green. We found that mitochondria were remarkably abundant in astrocyte branches in close proximity to calcium microdomains and that impairment of mitochondrial function reduced microdomain activity. We traced the source of this calcium to brief openings of the mitochondrial permeability pore (“mPTP”), a pore that is modulated by the generation of free radicals and plays an important role in sustaining ATP production by periodically resetting ion gradients. This calcium changes in microdomains provide an indirect readout of metabolic activity in the cell.

In addition to learning about the fundamental mechanisms that enable calcium signaling in astrocytes, we extended our analysis to assess how this form of signaling is affected in neurologic disease. When we genetically programmed astrocytes to make too much of a mutant form of the mitochondrial protein superoxide dismutase (SOD1), which causes some forms of amyotrophic lateral sclerosis (Lou Gehrig’s disease), their microdomain activity was substantially increased. This finding suggests that this mutation creates metabolic stress in astrocytes, which can promote neurons to die, either due to insufficient support from astrocytes or by astrocytes releasing toxic factors that induce neuronal death. Many questions remain to be answered, but we hope that the genetically engineered mice we developed will be useful for learning more about the mechanisms that trigger calcium changes in various cell types, under both physiological and pathological conditions.