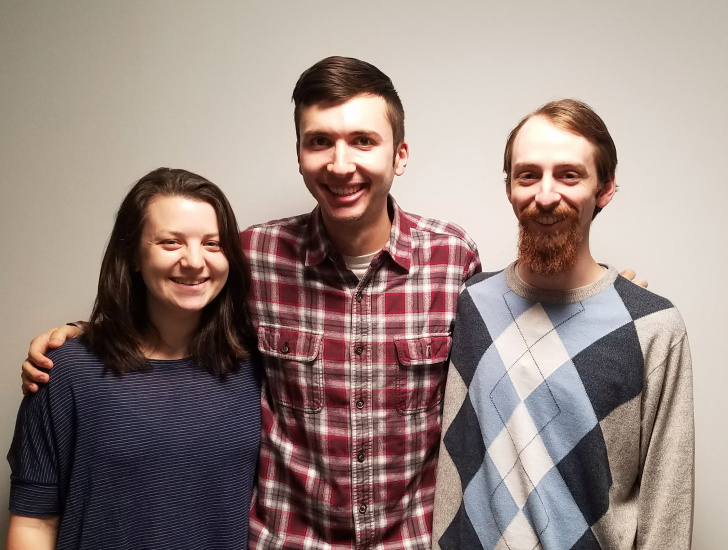 Congratulations to Neuroscience Graduate students Althea Cavanaugh, David Ottenheimer, and Cody Call who have each been awarded a National Science Foundtation Graduate Research Fellowship for 2017!

Althea got her B.A. from Bowdoin College and is currently a second-year graduate student in David Foster’s lab, studying the role of hippocampal place cells in spatial learning and navigation. Specifically, Althea is interested in how place cells encode environmental structure. She plans to use large-scale neural recording in behaving animals to discover new place cell phenomenology, and use computational modeling to understand the computational advantages and limitations of the hippocampal representation of space.

David, a graduate of Yale University, is a second-year student in Patricia Janak's lab. He is using in vivo electrophysiology to study how neurons in the nucleus accumbens respond to different features of rewards. He is interested in determining in what ways circuits involved in reward processing respond differently to various rewards, especially drugs of abuse and food. After characterizing these neurons' responses, he plans to use optogenetics to strategically activate and inhibit the cells to test their role in reward consumption.

Cody Call received his BS in psychology and biology from Florida State University. He is currently a second year student in Dwight Bergles lab where he studies glial cells' modulation of neural circuits. Using two-photon in vivo imaging of mouse cerebral cortex, Cody is investigating cell type-specific myelination patterns of cortical axons, and how these patterns are remodeled in response to sensory experience.