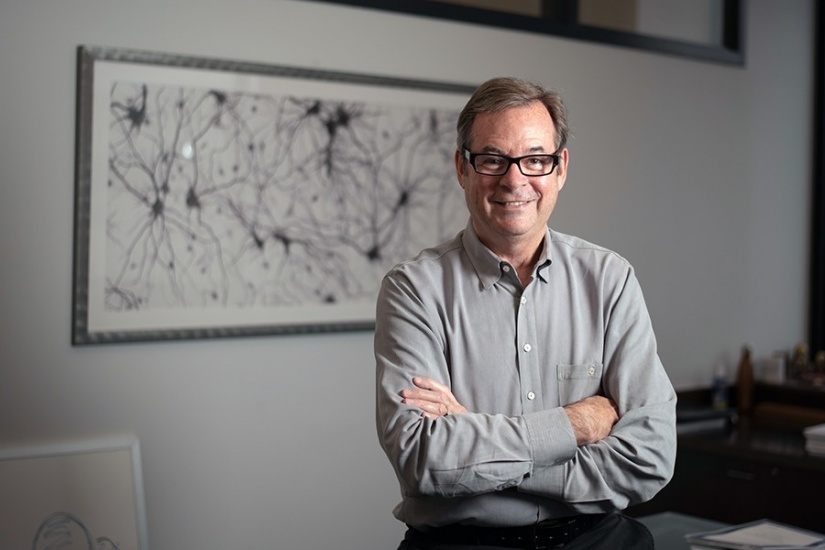 Full story from The Hub, by Saralyn Cruickshank:

When Richard Huganir first came across a Scientific American study finding that protein synthesis is a critical process in memory formation, he was consumed by a single simple question: Why?

It was the early 1970s, and the discovery of psychiatric drugs in the years before had made the study of the brain more urgent and more lucrative than ever. The Scientific American study, conducted by biochemist Bernard Agranoff, tested the chemical properties of a protein synthesis inhibitor called puromycin. Agranoff used goldfish exposed to the chemical to determine how it affected learning and memory. After issuing a warning light, he would expose the fish to intermittent electric shocks. They could avoid the shocks by relocating to the other side of an underwater barrier.

Goldfish aren't especially known for their long memories, but for Agranoff's experiment, the fish quickly learned to swim over the barrier at the beckoning of the light. Interestingly, they appeared to gain long-term knowledge of how to avoid shocks, too, recalling the meaning of the warning light up to four days later.

Unless they were treated with puromycin, that is. A goldfish whose brain was exposed to the protein synthesis-blocking agent demonstrated memory loss after a period of two hours.

Huganir, now a renowned neuroscientist at Johns Hopkins University, began his career as an enterprising high schooler in 1971 seeking to replicate Agranoff's experiments. He had secured the goldfish easily enough but had trouble obtaining the puromycin. So he did the most obvious thing he could think of—he wrote directly to Agranoff.

"He wouldn't tell me where to get it. He thought the experiment might be too sophisticated for a high school student," Huganir says. "Luckily, my biology teacher found it in a catalog somewhere. And looking back at my lab notebooks, I was running controlled experiments. It was actually pretty well-designed for a 17-year-old."

That spirit of intrepid curiosity fueled Huganir to become one of the leading scientists in his field. With a focus on how memory is encoded in the brain, he leads studies that explore the mechanisms that regulate synaptic transmission and plasticity—the molecular means of communication between neurons in the brain. A member of the National Academy of Sciences and the National Academy of Medicine, he's driven by a fundamental fascination with the human mind.

"I got really interested in neuroscience through self-reflection—wondering what and who am I," he says. "The brain is such a fascinating structure. It creates our emotions and our feelings and our thoughts, but we understand so little about how that process works. That's what I'm always trying to understand."

Huganir, a Johns Hopkins faculty member since 1988, is the latest researcher to join the ranks of the Bloomberg Distinguished Professors, a group of interdisciplinary scholars at Hopkins who are working to address major world problems and teach the next generation. The program is backed by a $350 million gift from Johns Hopkins alumnus, philanthropist, and three-term New York City Mayor Michael R. Bloomberg. Huganir will hold appointments in the School of Medicine's Department of Neuroscience and in the Department of Psychological and Brain Sciences in the Krieger School of Arts and Sciences.

"Dr. Huganir exemplifies the spirit of investigative and groundbreaking science," says Sunil Kumar, provost and senior vice president for academic affairs at Johns Hopkins. "We are thrilled to recognize the incredible leadership he has demonstrated—both at Johns Hopkins and for the global neuroscience community as the president of the Society for Neuroscience—with a Bloomberg Distinguished Professorship."

Huganir received his undergraduate degree in biochemistry from Vassar College in 1975 and his PhD in biochemistry and molecular and cell biology from Cornell University in 1982. That same year, he joined the laboratory of Nobel Prize-winning neuroscientist Paul Greengard, studying under him at Yale and later at Rockefeller University. Huganir served as an assistant professor of molecular and cellular biology at Rockefeller before joining the Johns Hopkins faculty. He has been the director of the Solomon H. Snyder Department of Neuroscience since 2006.

Huganir's research at Hopkins has been guided by an interest in how different disciplines of science relate to and inform each other. In 2015, he was appointed director of the Kavli Neuroscience Discovery Institute alongside co-director Michael Miller, a professor of biomedical engineering. The Kavli Institute, Huganir says, was specifically designed to promote cooperation across Johns Hopkins divisions.

"Dr. Huganir's pioneering work has led to groundbreaking insights into how the brain works, but his greater contributions are to the scientific community at Johns Hopkins and beyond," says Beverly Wendland, dean of the School of Arts and Sciences. "Our students will benefit from studying alongside such a respected leader and mentor, and we look forward to working with him to strengthen ties between the Kavli Institute and the Krieger School."

Adds Huganir: "Interdisciplinary collaboration is really critical to the future of neuroscience. I think that Johns Hopkins is one of the most interactive institutions in the country—that's why I'm here."

Lately, he's been especially interested in the connections between neuroscience and the study of genetics. Through genetic engineering and surgical interventions, for example, his team has been able to observe synaptic activity in the brains of living mice—using a two-photon microscope to watch neurotransmitters and receptors while the mouse learns a new task.

The scientific advancements and collaborations across genetics and neuroscience have made possible a whole new way of thinking about learning and memory, he says.

"We can actually see the receptors move around in the synapse in an intact mouse," Huganir says. "If you told me we would be able to be doing that 10 years ago, I would have said you were crazy. It's really that revolutionary."

Huganir is part of an interdisciplinary team at the Kennedy Krieger Institute that is working to better diagnose SynGAP deficiencies in children, develop treatment plans to help them learn to walk and talk, and screen drugs that mitigate the synaptic malfunction in the brain.

"After working with this protein for 20 years, we know it really well. We know what it does," Huganir says. "We're trying to rescue the deficits that are related to the mutation, and it really shows the strength of basic science and how it can be applied to complicated diseases and disorders."

Huganir celebrates curiosity in others, too—and none more so than his students. He instructs mainly graduate students and post-doctoral fellows, and he employs several undergraduates in his lab. He also takes time to speak with high school and middle school students—those curious kids who demonstrate that same adventurous spirit Huganir had as a teen.

"One thing I tell students all the time is that you have to follow your passion," Huganir says. "Do whatever it takes to answer the questions that you're passionate about, because that's what motivates us—and keeps us curious."