Lionel Rodriguez, a Neuroscience grad student in the Martinowich lab, discusses implicit bias in this interview with SfN.

Article:Why Conversation and Community are Important to Stopping Bias 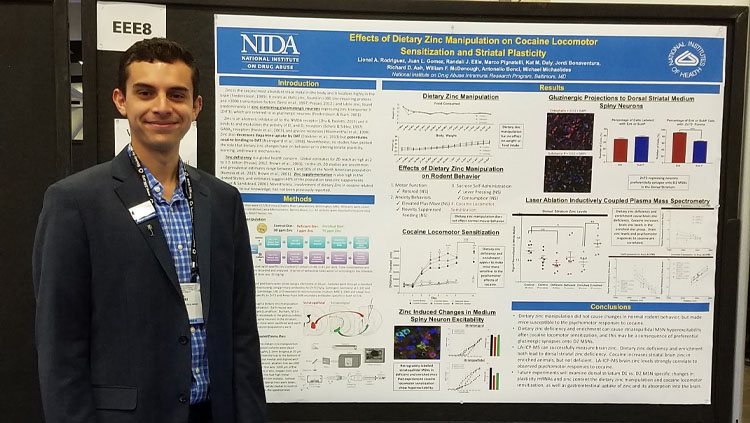 Lionel Rodriguez is a neuroscience PhD candidate at Johns Hopkins. In this interview, Lionel discusses dealing with implicit bias and imposter syndrome. As a Gay, Latinx scientist, he also gives his hopes for the future of approaching discussions of equitable treatment and inclusion of historically marginalized communities in STEM.

Tell me about your career path.

My interest in science started early. As a child to Mexican immigrants, English is my second language. Because of this, math and science were more accessible to me and I gravitated to them naturally. While I was an undergraduate at Yale, philosophy and psychology opened my mind to how the brain works. Over time, I became attracted to neuroscience and ended up doing research both at Yale then at NIH. Now I am pursuing a PhD at Johns Hopkins studying the neural circuitry underlying social behaviors in mice.

I personally couldn’t pursue science without participating in outreach, specifically that which aims to increase diversity and inclusion. Science benefits from engaging and growing with the communities it impacts, so for me, science and outreach go together – one recharges me to jump back and do the other. Although, I hope one day we won’t have to work so hard to make science inclusive.

What is the biggest challenge you've faced in your career, and how did you overcome it?

As early as middle school, I was told I wouldn't succeed or do well academically. I looked up to my teachers and counselors, so I seldom thought what they said was rooted in bias, but many times it was. The constant underestimation and undermining of my abilities contributed to the imposter syndrome I experience today as a PhD student.

Learning where many of these biases originate and coming to terms with the systemic aspects to them, I learned how to better process, and often ignore, the hurtful things people say to me. Having mentors from historically marginalized communities in high school and college also helped me immensely. They understood my experiences, stood up for me, and helped me realize my true potential.

When it comes to handling my imposter syndrome, I have found the academic Twitter community can help put things into perspective. For example, there are PIs who openly discuss how they apply to a dozen grants a year and only get one funded, if they are lucky. People tend not to talk publicly about their own failures, but it’s part of the process. It should not define you. When people take the time to share experiences of failure, I remember it’s okay to mess up. I can (and will) bounce back to do better.

Can you talk about bias you have faced and how you’ve handled it?

Growing up, a lot of bias I experienced stemmed from my paternal last name, Rodriguez. Teachers and counselors stereotyped me and expected less of me. A salient example of this was when my high school counselor overrode my request to be in honors classes my freshman year and put me in lower-level classes, despite my strong academic record. When questioned on the matter, she addressed me as “Mr. Rodriguez” and made a comment about how “someone from my background couldn’t handle honors courses.” It was weird to me that something as small as a name could have such an impact on how I was treated.

Now, when I meet people professionally, I intentionally do not tell them my last name, to avoid those biases, which is sad but a harsh reality of the world we face. Omitting my last name helps in certain circumstances, which makes it clear other people have it worse. While I identify as Latinx, I benefit from being light-skinned. Awareness of this privilege taught me from a young age I need to listen to and support Black and Brown folks who experience bias and microaggressions more often because of their skin color.

Actively listening to how bias affects other people makes me more likely to call it out if I witness it, which is something that needs to be done more. When bias is directed at me, I tend to ignore it. But if it’s directed at someone else, I let the offender know it’s uncalled for, or prompt them to think about what they said with something like, "What do you mean by that?" or "What does that imply?"

What do you think needs to happen to support representation of LGBTQ people?

We need to uplift members of the trans community, who are often not represented and supported in science. As a gay scientist, I have faced discrimination throughout my career, such as assumptions about what kind of partner I should have, or uncomfortable reactions or comments to me talking about my dating life as a gay man.  While these experiences are difficult, the experiences of my trans peers have been far more isolating. There are many trans scientists who cannot openly be themselves because of the blatant discrimination they face. In many cases they don’t have the support networks they need to succeed, and I often hear that early career trans scientists don’t have many, if any, trans role models in science to look up to. The STEM community as a whole needs to be far more invested in the success of trans scientists.

It’s important for LGBTQ+ STEM trainees to know there are other LGBTQ+ scientists out there who will be there for you and listen to your experiences. Finding a strong LGBTQ+ community in neuroscience has been helpful for me, so I hope other people find communities to support them.

There’s also a lot to acknowledge when it comes to the intersection of LGBTQ+ identity and other marginalized identities, such as race or disability. For example, the experience of being Black and Queer is very different than being just Black or just Queer. Using an umbrella term like ‘Underrepresented Minority’ dilutes the different experiences members of each identity face. We need to acknowledge the richness of an individual’s identity and stop reducing them to an acronym.

What change do you hope to see in the STEM community?

The academic system focuses so heavily on recruitment and fails to pay attention to the culture and environment faculty and trainees are being recruited into. We need a supportive environment where people feel included and comfortable. A lot of what I have extrapolated from my peers from marginalized communities is that they don't feel supported in the same ways their cis, white peers are.

I think the first and most important step is to learn how to listen and allow yourself to feel uncomfortable and vulnerable. White people tend to get defensive when discussing the issues faced by members of marginalized communities as if they alone are the reason the system is the way it is. This is a huge barrier to open, productive conversations. It takes growth to realize the oppressive aspects of the academic system are much larger than one individual. To understand this system and how it functions, we have to step back and look at it in an unbiased and uninvolved way. I want people to be able to break down barriers and have conversations for the betterment of science.

That being said, scientists from underrepresented backgrounds shouldn’t be required to share their experiences on these topics. People should be constantly educating themselves and learning from the wide array of scholarship on these topics by LGBTQ+ folks and Black, Indigenous, and People of Color. If people engage with these materials, it will open pathways for more productive and transformative conversations.

Because every group faces different issues, I don't have a tell-all answer, but I do think the conversations have to start with actively listening and taking what people say about their experiences seriously.