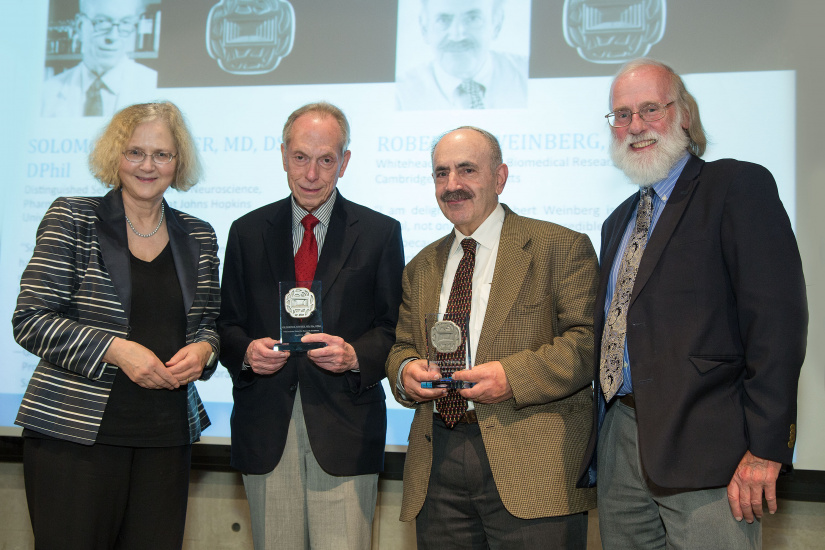 LA JOLLA-The Salk Institute awarded two American scientists with its prestigious Medal for Research Excellence, a distinction that has only been bestowed twice before in the Institute’s 55-year history. The honorees, who received their awards April 13, independently addressed the Salk community in presentations prior to an awards reception.

“Sol Snyder’s seminal contributions to the field of neuroscience continue to fuel research today, while Robert Weinberg’s work has changed the world’s understanding of cancer,” says Elizabeth Blackburn, president of the Salk Institute. “It is pioneering careers such as theirs that embody the spirit of Salk’s research excellence honor.”

Snyder, a member of the US National Academy of Sciences, is regarded internationally for his research on neuropharmacology, seeking the cellular mechanisms by which neurotransmitters and drugs alter brain function. In the early 1970s, he discovered the brain’s opiate receptors and is credited with launching a generation of research into neuropeptides, receptors and behavior. He is the recipient of the Albert Lasker Award for Basic Medical Research, the Wolf Prize, the Bower Award, the National Medal of Science and the Albany Medical Center Prize in Medicine and Biomedical Research.

A graduate of Georgetown University, Snyder is the Distinguished Service Professor of Neuroscience, Pharmacology and Psychiatry at Johns Hopkins University School of Medicine. In 1980, he founded the Department of Neuroscience, serving as its director until 2006 when the department was renamed in his honor. He helped start the companies Nova Pharmaceuticals and Guilford Pharmaceuticals, and is the Director of Drug Discovery at the Lieber Institute for Brain Development in Baltimore, MD.

“Sol Snyder is one of the giants of modern neuroscience,” says Greg Lemke, professor in the Molecular Neurobiology Laboratory at Salk. “His work has defined the basic pharmacology of most of the brain’s neurotransmitters, their receptors, and their transporters, and has been translated into important therapeutics. If you’ve benefited from selective serotonin reuptake inhibitors such as Prozac, you can thank Sol.”

The first Salk Institute Medals were awarded in 2006 to Donald Metcalf, an Australian physiologist whose research on cancer has improved disease treatment, and to Paul Farmer, anthropologist, physician and co-founder of Partners in Health. In 2010, gene expression pioneer Robert G. Roeder of The Rockefeller University was awarded the Salk Medal for Research Excellence, and Irwin M. Jacobs, renowned entrepreneur and philanthropist, received the Salk Medal for Public Service. In 2014, violinist Itzhak Perlman was awarded the Public Service medal for all he has done to eradicate polio around the globe.

“The immense accomplishments of both these scientists in their respective research fields made the decision easy to bestow upon them the Salk Medal for Research Excellence,” says Professor Tony Hunter, who chairs the faculty committee that determines whom to honor.

The Salk Institute Medal was designed for the Institute by French fashion designer and businesswoman Paloma Picasso. Known for her dramatic jewelry creations, she is the youngest daughter of Pablo Picasso and painter and writer Françoise Gilot, who later married Jonas Salk.