Congratulations to Thomas Burnett and Gian Molina-Castro for being inducted into the 2022 Bouchet Graduate Honor Society! 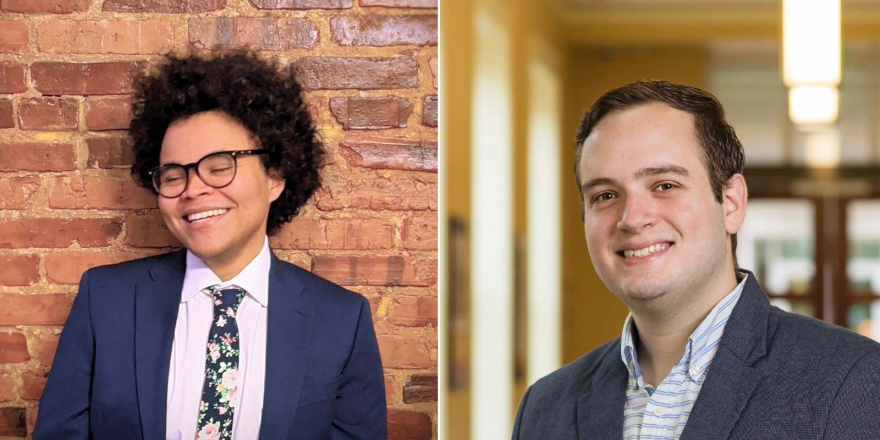 Thomas and Gian will be officially inducted at the national ceremony at the National Bouchet Honor Society Induction Ceremony and Conference hosted by Yale University (this year virtually), on April 7-8, 2022.

Johns Hopkins will have an induction ceremony with the JHU President and Provost on May 17th 2022.

Edward Bouchet (1852-1918) graduated from Yale College in 1874. He went on to be the first African American to earn a doctorate from an American university when he earned a Ph.D. in physics at Yale University in 1876. At that time, Bouchet was the sixth person in the western hemisphere to earn a doctorate in physics. He was also one of the first African Americans to be elected to the prestigious Phi Beta Kappa Honor Society.

Named for Edward Alexander Bouchet, the first African American doctoral recipient in the United States, the Edward Alexander Bouchet Graduate Honor Society (Bouchet Society) recognizes outstanding scholarly achievement and promotes diversity and excellence in doctoral education and the professoriate. The Bouchet Society was inaugurated on Thursday, September 15, 2005 with a simulcast ceremony held at Yale University and Howard University. As the co-founding chapters, Yale University and Howard University seek to recognize and continue Dr. Bouchet’s pioneering contributions to doctoral education. The Bouchet Society seeks to develop a network of preeminent scholars who exemplify academic and personal excellence, foster environments of support, and serve as examples of scholarship, leadership, character, service, and advocacy for students who have been traditionally underrepresented in the academy. In the spirit of Bouchet’s commitment to these pursuits both within and without the academic realm, inductees into the honor society bearing his name should also exhibit these qualities.

One national charter with two chapters was inaugurated by Yale University and Howard University on September 15, 2005, in commemoration of Bouchet’s birthday. Please refer to the charter regarding the eligibility requirements and application process for obtaining individual membership in the society or establishing an institutional chapter.